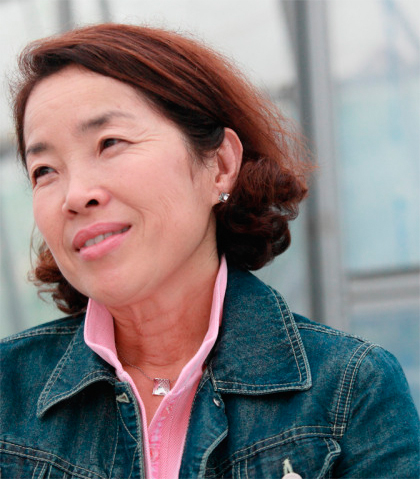 Owner of the Reiko Nakasugi Farm

The sky seemed too high up to be Setagaya. Reiko Nakasugi’s workplace, the Reiko Nakasugi Farm, was situated nearby, protected by the grove of a village shrine. You couldn’t say it was a big farm, but it was a very well-cared for, and lush with greenery. 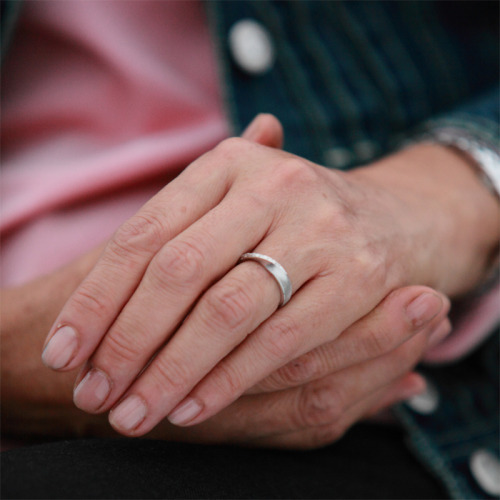 Why did you go into farming?

I just happened to marry into a family that ran a farm.

That said, my husband didn’t work in the farming industry. I only decided to go into it seriously myself when our eldest son entered nursery school. It wasn’t as though I started out actively wanting to be a farmer.

I get up and start working when the sun rises, and rest when it goes down.

I get out of bed at 5:00am during the height of summer. I work for around seven hours in the morning, and then I start up again for a little while from around 4:30pm – after it’s become a bit dark. I get up at around 6:00am during winter. Rising and falling with the sun, that’s my working style.

What I learn and feel from touching the earth

Even though it is work, farming brings the same joy as raising a child. I feel the joy of watching my crops grow every day. I’m moved as I watch them grow rapidly, neatly facing the sun.

When my children were little, everything was a fight against time. My time was limited – I always had to work frantically to try and finish on time. And if I couldn’t do it, I’d “give up.” I think that “giving up” is also important. At times it’s necessary to give up on something, to get rid of something. Even so, I strangely feel as though I’ve done some substantial work.

Getting people from the around the community involved

There’s a volunteer organization called “Team Reiko” who give me support. In addition to them, students from the Tokyo University of Agriculture also come and help out. Men from the neighborhood also drop by to do some weeding. 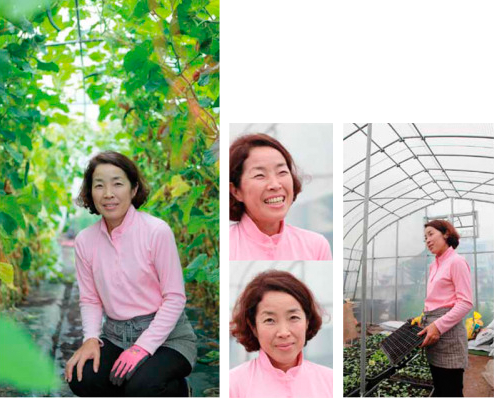 Creating “Fun” when working in a team

When the lilies, and other flowers that we’ve raised on the farm sell well at the farm fresh market, we take those profits and put them in a separate can. We throw a little party, or do something fun with those profits once we have enough.

When you’re working on a team, I think it’s very important to organize something “fun” like this.

In one of our previous parties, we used the money we made from selling flowers to buy a slice of every kind of cake in a cake shop. Everyone had fun eating their share.

Most people don’t know much about the clean-up after the harvest. The truth is, it’s dull and difficult work. A cornstalk is rooted firmly into the ground, so just pulling out a single one leaves me tired. I stand in front of my field in shock when I think about how I have to do all of the clean-up alone.

Farming is the origin of work

I feel like farming is really the origin of work. By plowing the soil and sowing seeds in an empty space, I create “something” out of “nothing.” I sell it and get some money. I don’t work in mass-production agriculture and I don’t get a lot of money from my crops. Despite that, I feel strongly about my work because I am crawling on the ground on my hands and knees working with vegetables and dirt every single day. 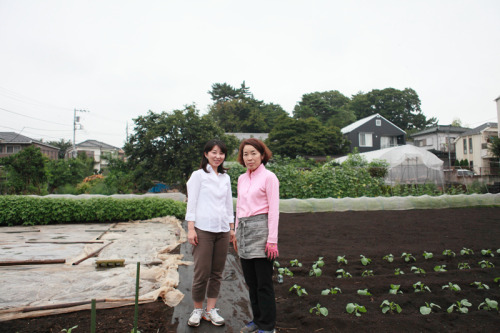 When I met Reiko at the store, she seemed very cool and fashionable. I couldn't believe that she would get covered in dirt as she worked. However, every single word she spoke was friendly and full of kindness towards people and other living things. This gap was very refreshing.

In the back of her mind, I'm sure she had a strong resolution to work alone with the earth. It must have been a situation that she arrived at by overcoming a surprising number of hardships.

In addition, she understands the importance of the craftsmanship and design sense that goes into jewelry. I think that a person's philosophy (way of thinking) can be seen through their fashion sense and the jewelry get choose to wear. Improving oneself may be about improving one's sense.

Work, home, community, and oneself. Putting them all into simultaneous synchronization – rather than going to the trouble of creating a space to do them all separately – is what I felt the true meaning of work to be. Whether man or woman, the earth responds truthfully to those who face it head-on.

"Storybook. For those who live life single-handedly" Production team.

Any cookies that may not be particularly necessary for the website to function and is used specifically to collect user personal data via analytics, ads, other embedded contents are termed as non-necessary cookies. It is mandatory to procure user consent prior to running these cookies on your website.